Throughout the ages, man has been using architecture to bridge the gaps between physical obstacles, for the purpose of providing an easy passage. Most of these bridges are also regarded as landmarks and are a vital part of the infrastructures of regions around the world. Some have even become city icons because of their influence and engineering wonder. Below is a list of the 17 most famous bridges in the world. 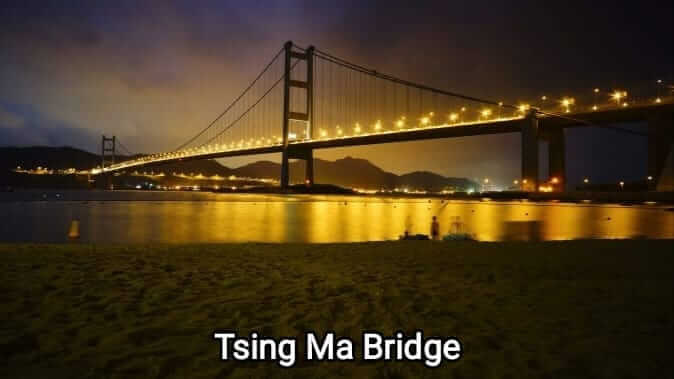 Hong Kong’s Tsing Ma Bridge is the largest suspension bridge in the world to feature two decks and carry both road and rail traffic.
Not only that, but it was subjected to some serious wind tunnel testing as Hong Kong is subject to powerful typhoons. After costing $920 million (HK$7.2 billion), the Tsing Ma Bridge opened in 1997. There are no walkways on the bridge and it features sheltered carriageways on the lower deck when very strong winds prove to be too much for vehicles to safely handle. 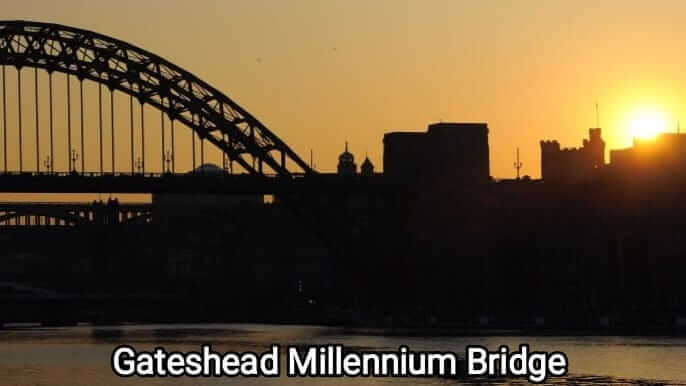 The Gateshead Millennium Bridge is the world’s first and currently only tilting bridge. But the most amazing thing about this pedestrian and biker crossing of the Tyne River is that it appears as if an eye is winking whenever it is raised and lowered.
Its innovative and unique design has won loads of awards since Queen Elizabeth officially opened it in 2002. It was lowered into place by Europe’s largest floating crane — Asian Hercules II.

15. Great Belt Bridge: 17 Most Famous Bridges in the World 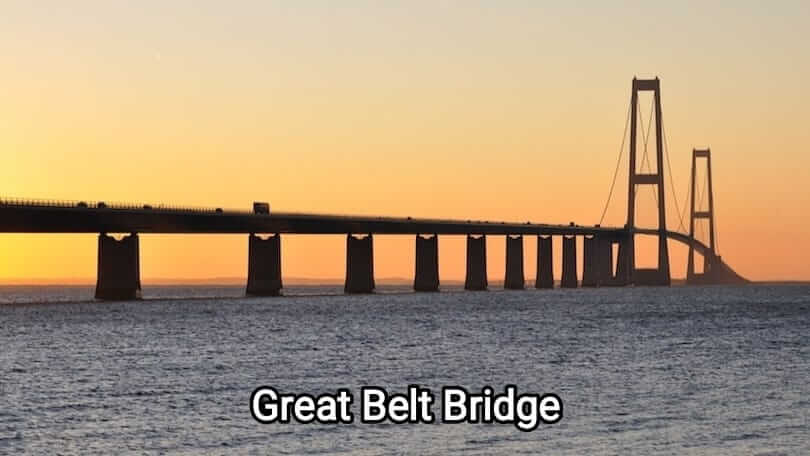 The Great Belt bridge is actually two bridges – an Eastern and a Western section, split by the small island of Sprogø. The East Bridge, a 1,624 meter (5,328 feet) long suspension bridge crosses the deepest part of Storebælt between the island of Zealand and Sprogø. It has the third longest main span in the world. At 254 meter (833 feet) above sea level, the East Bridge’s two pylons are the highest points in Denmark. The West Bridge is a 6,611 meter (21,689 feet) long combined rail and road bridge between Sprogø and Funen.

14. Chapel Bridge: 17 Most Famous Bridges in the World

The Chapel Bridge is a 204 meter (670 foot) long bridge crossing the Reuss River in the city of Lucerne in Switzerland. It is the oldest wooden covered bridge in Europe, and one of Switzerland’s main tourist attractions. The covered bridge, constructed in 1333, was designed to help protect the city of Lucerne from attacks. Inside the bridge are a series of paintings from the 17th century, depicting events from Luzerne’s history. Much of the bridge, and the majority of these paintings, were destroyed in a 1993 fire, though it was quickly rebuilt.

13. Chengyang Bridge: 17 Most Famous Bridges in the World 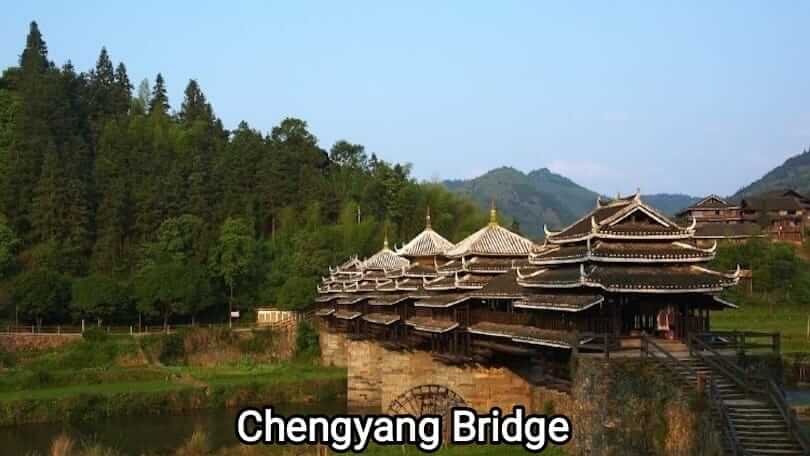 Chengyang Bridge (also known as Wind and Rain Bridge) was built in 1916, and it is the most famous among the wind and rain bridges in the Dong Minority Region in China. The bridge stretches across the Linxi River and it still in heavy use. It is constructed of wood and stone without nails or rivets and is the largest of all the wind and rain bridges. It is 64.4 meters long, 3.4 meters wide and 10.6 meters high.

12. Brooklyn Bridge: 17 Most Famous Bridges in the World 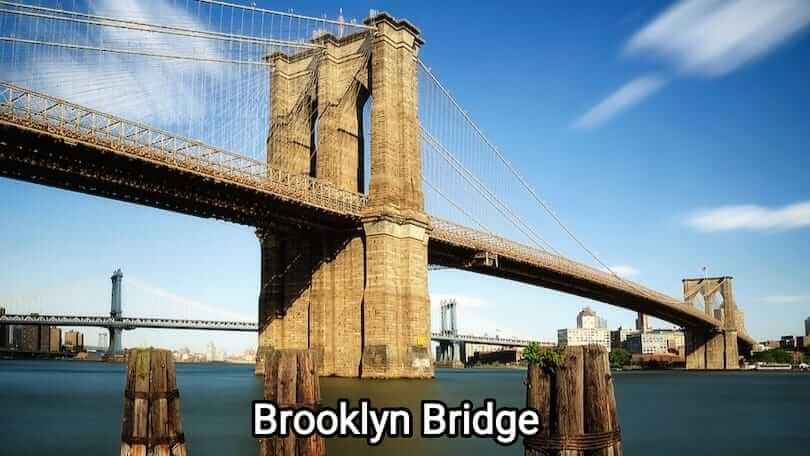 Completed in 1883, Brooklyn Bridge connects Manhattan and Brooklyn by spanning the East River. At the time it opened, and for several years, it was the longest suspension bridge in the world and it has become a famous and iconic landmark of New York. The bridge has a wide pedestrian walkway open to walkers and cyclists. This walkway takes on a special importance in times of difficulty when usual means of crossing the East River have become unavailable as happened during several blackouts and most famously after the September 11, 2001, attacks.

11. Alcantara Bridge: 17 Most Famous Bridges in the World Crossing the Tagus River at Alcántara in Spain, the Alcántara Bridge is a masterpiece of ancient Roman bridge building. The bridge was built between 104 and 106 by an order of the Roman Emperor Trajan in 98 AD, who is honored by a triumphal arch in the center of the bridge and a small temple at one end. The Alcántara Bridge has taken more damage from war than from the elements. The Moors destroyed the smallest arch on one side while the second arch on the other side was destroyed by the Spanish to stop the Portuguese.

10. Sydney Harbour Bridge: 17 Most Famous Bridges in the World 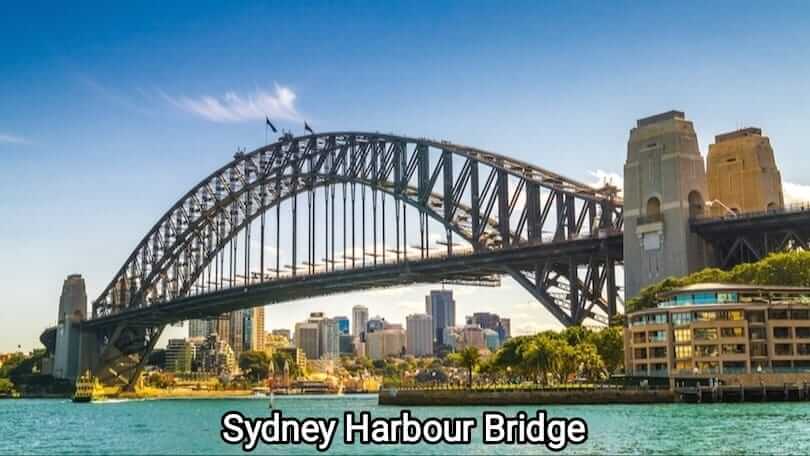 Sydney Harbour Bridge is one of Australia’s most well known and photographed landmarks. It is the world’s largest (but not the longest) steel arch bridge with the top of the bridge standing 134 meters (440 feet) above Sydney Harbour. It took eight years to build and opened in March 1932. Because the steel expands or contracts depending on whether it is hot or cold the bridge is not completely stationary and can rise or fall up to 18 cm (7.1 inch).

9. Stari Most: 17 Most Famous Bridges in the World Stari Most (“The Old Bridge”) is a famous bridge crossing the river Neretva in the city of Mostar in Bosnia and Herzegovina. It was built by the Ottaman Turks in 1566 and stood for 427 years, until the bridge was destroyed in 1993 during the Bosnian War. Subsequently, a project was set in motion to rebuild it, and the new bridge opened in 2004. It is traditional for the young men of the town to leap from the bridge into the Neretva. As the river is very cold, this is a very risky feat and only the most skilled and best trained divers will attempt it. 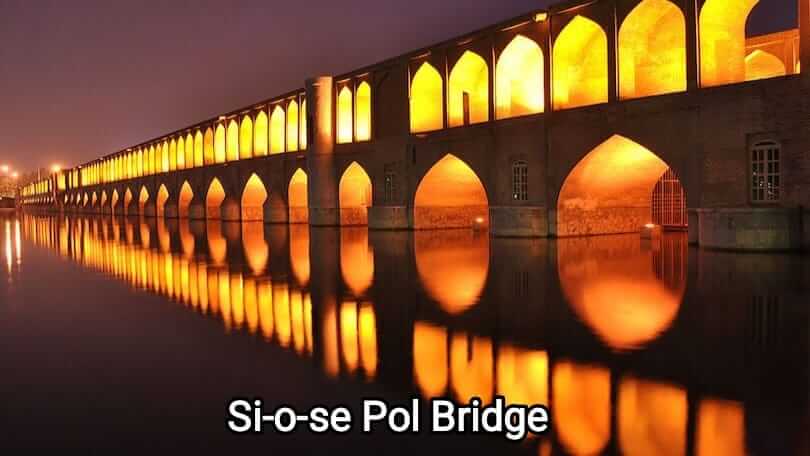 Si-o-se Pol (The Bridge of 33 Arches) is a famous bridge in the Iranian city of Isfahan. It is highly ranked as being one of the most famous examples of Safavid bridge design. Commissioned in 1602 by Shah Abbas I, the bridge is build of bricks and stones. It is 295 meters long and 13.75 meters wide. It is said that the bridge originally comprised 40 arches however this number gradually reduced to 33.

7. Akashi-Kaikyo Bridge: 17 Most Famous Bridges in the World 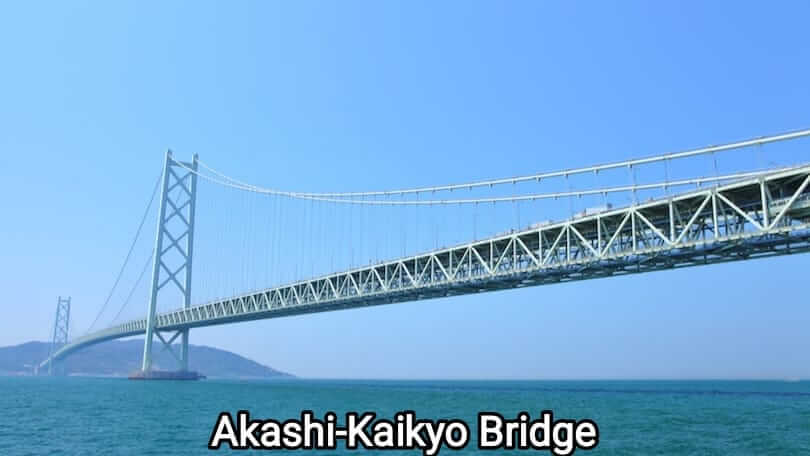 The Akashi-Kaikyo Bridge, also known as the Pearl Bridge, is the longest suspension bridge at 1,991 meters (6,532 feet) in the world. It spans the Akashi Strait in Japan connecting Kobe on the mainland and Iwaya on Awayi Island. The bridge took almost 12 years to build and was opened for traffic in 1998. The central span was originally only 1,990 meter but the Kobe earthquake on January 17, 1995, moved the two towers so that it had to be increased by 1 meter. 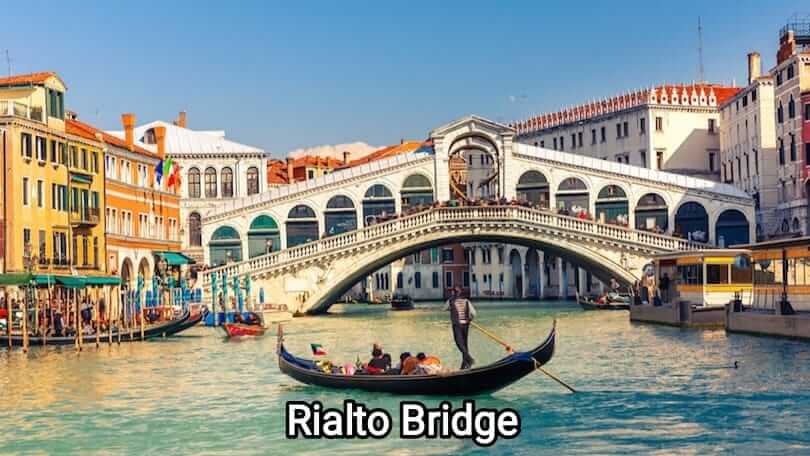 The Rialto Bridge is one of the four bridges spanning the Grand Canal in Venice, Italy. It is the oldest bridge across the canal. The present stone bridge, a single span designed by Antonio da Ponte, was completed in 1591 and was used to replace a wooden bridge that collapsed in 1524. The engineering of the bridge was considered so audacious that some architects predicted a future collapse. The bridge has defied its critics to become one of the architectural icons of Venice. 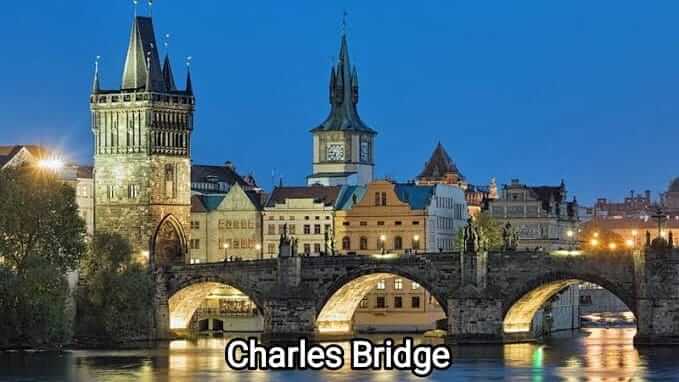 The Charles Bridge is a famous is a stone Gothic bridge that crosses the Vltava river in Prague, Czech Republic. Its construction started in 1357 under the auspices of King Charles IV, and finished in the beginning of the 15th century. As the only means of crossing the river Vltava, the Charles Bridge was the most important connection between the Old Town and the area around Prague Castle. connection made Prague important as a trade route between Eastern and Western Europe. Today it is one of the most visited sights in Prague with painters, owners of kiosks and other traders alongside numerous tourists crossing the bridge. 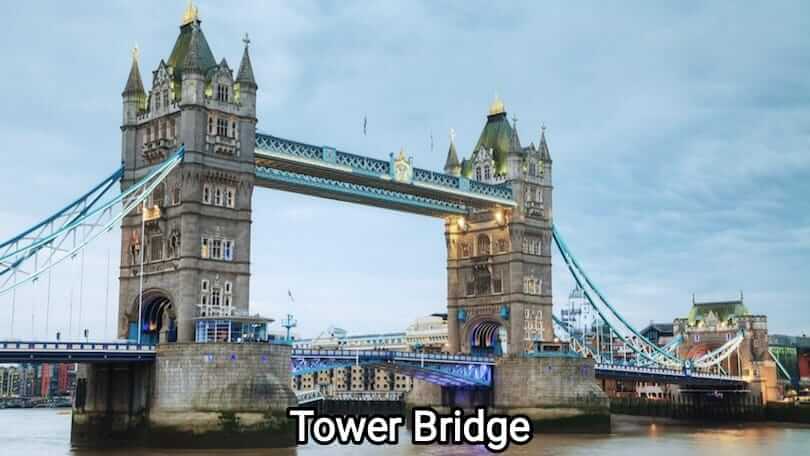 Tower Bridge is a combined bascule and suspension bridge in London, over the River Thames. It is close to the Tower of London, which gives it its name and has become an iconic symbol of London. Construction started in 1886 and took eight years to build. The bridge consists of two towers which are tied together at the upper level by means of two horizontal walkways which are designed to withstand the forces of the suspended sections of the bridge. 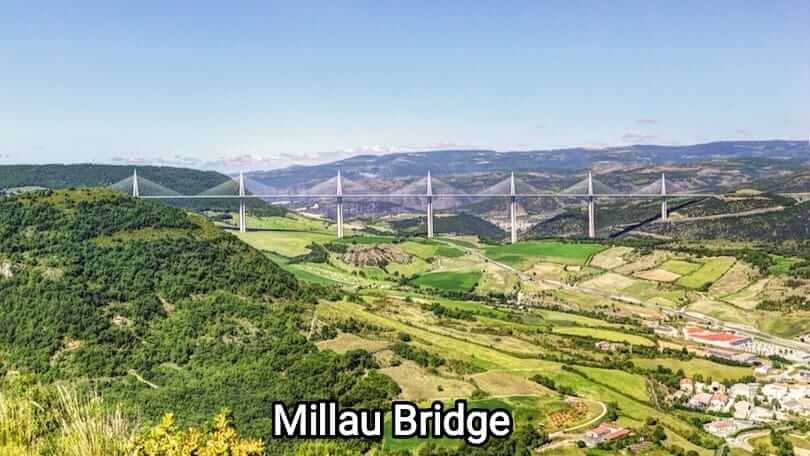 The Millau Viaduct is an enormous cable-stayed road-bridge that spans the valley of the river Tarn near Millau in southern France. It is the tallest vehicular bridge in the world, with the highest pylon’s summit at 343 meters (1,125 ft) — slightly taller than the Eiffel Tower. The speed limit on the bridge was reduced from 130 km/h (81 mph) to 110 km/h (68 mph) because of traffic slowing down, due to tourists taking pictures of the bridge from the vehicles. Shortly after the bridge opened to traffic, passengers were stopping to admire the landscape and the bridge itself. 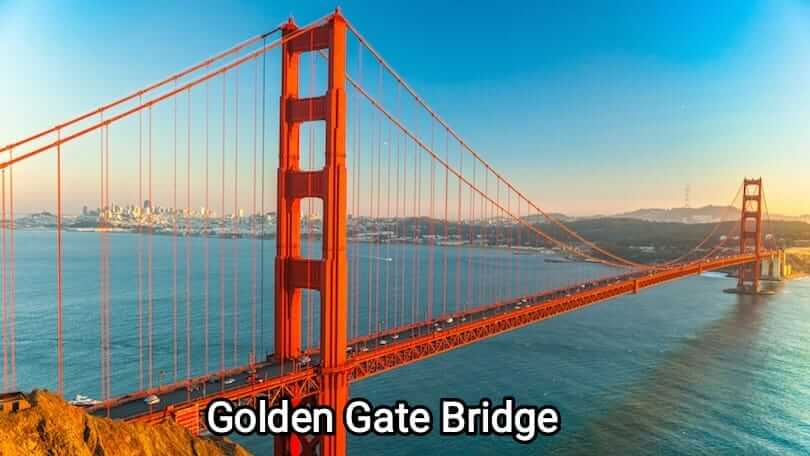 The Golden Gate Bridge is a suspension bridge spanning the Golden Gate, the strait between San Francisco and Marin County to the north. The masterwork of architect Joseph B. Strauss, whose statue graces the southern observation deck, the bridge took seven years to build, and was completed in 1937. The Golden Gate Bridge was the longest suspension bridge span in the world when it was completed, and has become one of the most popular tourist attractions in San Francisco and California. Since its completion, the span length has been surpassed by eight other bridges. The famous red-orange color of the bridge was specifically chosen to make the bridge more easily visible through the thick fog that frequently shrouds the bridge. 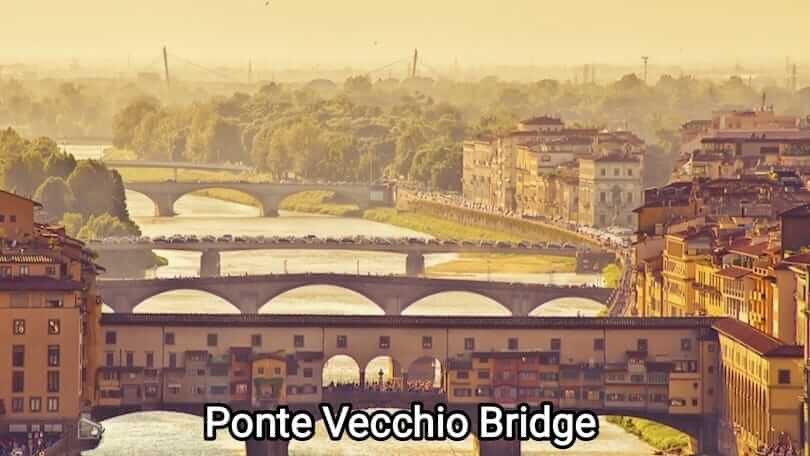 The Ponte Vecchio (literally “old bridge”) is a Medieval bridge over the Arno River in Florence; the only Florentine bridge to survive WW2. The bridge is famous for still having shops built along it, as was common in the days of the Medici. Butchers initially occupied the shops; the present tenants are jewelers, art dealers and souvenir sellers. It is said that the economic concept of bankruptcy originated here: when a merchant could not pay his debts, the table on which he sold his wares (the “banco”) was physically broken (“rotto”) by soldiers, and this practice was called “bancorotto” (broken table).

You’re reading Vishwagujarat — experts who break news about Google and its surrounding ecosystem, day after day. Be sure to check out our homepage for all the latest news. As well as exclusive offers on Latest News, Movie reviews, Sports News, best recharge Plans, popular mobiles with the latest tech news and reviews from all over the world. If you like our article then share it with your friend’s groups and bookmark our website on your desktop.

2 thoughts on “17 Most Famous Bridges in the World”