IPL Point Table 2022 Top Players will be discussed here. TATA IPL 15 Teams, Top Batsman, Bowler, Fielder, all-rounder fair player list. The festival of T20 cricket Indian Premier League is back in India. It has been the biggest T20 league in the world. IPL Point Table 2022 Group-wise – It’s the only league where all the big giant players of cricket from around the world play with each other. The new season of the Indian Premier League is going to start from 26th March 2022. All the fans are really excited about the IPL and they cannot wait for it to start.

In this article we are going to discuss about the points table of the IPL, Top Teams and Top Players of the season. There have been 14 seasons of Indian Premier League that has been played since 2008. From the year 2008 it has become the most popular cricket league in the world. All the fans eagerly wait for the next season of the IPL.

This year many new changes have been made in the IPL. The biggest change in this season has been that a 2 new IPL teams have been introduced. This year 10 teams will participate in this league to win the title which will make this league more competitive and interesting. By adding 2 more teams the number of matches has also been increased.

The second big change in this IPL has been that the title sponsor of the IPL has been changed from Vivo to Tata so, in this year this will be TATA IPL. This year IPL will be hosted in India. Because of the Covid19, last two seasons of this league were hosted in the UAE.

This team also all the teams have to follow the Covid protocols that means every team has to create a Bio Secure Bubble and no player will be allowed to leave that bubble. Due to Covid19 all the league matches will be played only in Maharashtra and the playoffs will be played in Ahmedabad but it has not been confirmed yet. 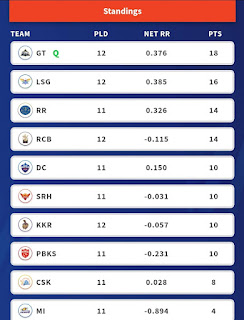 Festival of T20 cricket will be back in India and the 15th season of the Indian Premier League commence from 26th March 2022. Keep your eyes on IPL Point Table 2022, Best players performance team-wise.

This year total of 10 teams will be participating in this year’s IPL. This year a mega auction was also conducted so, many new captains have also been introduced in this season. Here is the list of the teams along with their captains.

This year the format of the league has also been changed. Earlier each team used to face every team twice in the league. But this year teams have been divided into 2 groups and each team will face every team of their group twice and team from the opposite group once but they have to face one team from the opposite group twice that has same serial number. like first team from the Group A will face 1st team of groups twice. Groups have been mentioned below along with serial numbers.

The point system of the Indian Premier League will be same. The table of both the groups will be one. Out of 10 teams, top 4 teams will qualify for playoffs. In the point system 2 points will be given to the winning team and no point will be awarded to losing team. In case of tie, a super over will be played in between teams. In case of draw 1 point will be given to each team. The IPL Point Table 2022  will be updated regularly. So, to check the points table stay in touch with us.

You’re reading Vishwagujarat — experts who break news about Google and its surrounding ecosystem, day after day. Be sure to check out our homepage for all the latest news. As well as exclusive offers on Letest News, Movie Review, Sports News, best recharge Plans, popular mobiles with the latest tech news and reviews from all over the world. If you like our article then share with your friend’s groups and bookmarks our website to your desktop.