Rishi Sunak Biography, family, Net Worth, Political career: The Sunday Times Rich List has recognized Rishi Sunak and his wife, Akshata Murty, as the first frontline politicians. Since he was a banker before entering politics and married a daughter of an entrepreneur, it’s widely believed that the Chancellor has the most incredible wealth of any member of parliament. The announcement of his inclusion on the list comes only a few days after the Chancellor predicted that the rising cost of living would make the following months “difficult” for families. Read the article to know about Rishi Sunak Biography. 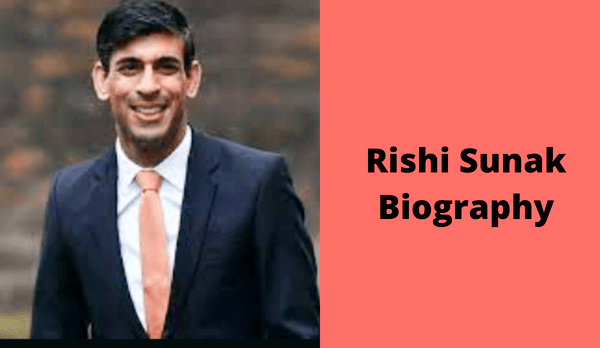 As Chancellor of the Exchequer since February 2020, Rishi Sunak is a British politician of Indian descent. As of February 2020, he holds this position. In addition to being a member of the Conservative Party, he has also held the position of Chief Secretary to the Treasury from 2019 to 2020. Since 2015, he has served as the Member of Parliament for Richmond (Yorks), which is located in North Yorkshire.

Rishi Sunak, who is of Indian descent but now serves as the Chancellor of the United Kingdom, might become Prime Minister shortly if the stars align in his favour. Reports indicate that the current Prime Minister, Boris, would resign shortly and that Sunak might take over as the next PM. According to Betfair, 57-year-old Johnson is under pressure to resign from his position as Prime Minister as a result of the revelations that he hosted a drinks party at Downing Street in May 2020 during the first Covid-19 lockdown. This pressure is coming from both the opposition and his own Conservative Party.

Rishi Sunak was born on born 12 May 1980 (age 42 years; as of 2022) in Southampton, Hampshire. His zodiac sign is Taurus. He completed his schooling at Winchester College (a boarding school for boys in Winchester, Hampshire), where he was a head boy. He then finished his undergraduate course of education with a degree in PPE (Philosophy, Politics and Economics) from at Lincoln College, Oxford University. He also acquired a degree in MBA from Stanford University, where he attended as a Fulbright scholar. Before stepping into politics he worked in with several top-class large investment firms.

According to the Sunday Times Rich List, Mr Sunak and Ms Murty have a wealth of around £730 million. Before entering politics, Mr Sunak had a career in the investment banking industry with the American firm Goldman Sachs. After that, he went into managing hedge funds and finally established his own company, Theleme Partners, in 2010.

In July 2019, former Chancellor Sajid Javid appointed him chief secretary to the Treasury, and he formed a blind trust whose assets are estimated to be multi-million pounds. People can earn income on their assets via blind trusts, which conceal the locations of their money’s actual investments. With Mr Sunak now in control of the economy of the UK, it is hoped that this would eliminate any potential conflicts of interest.

Rishi Sunak’s parents, Yashvir and Usha Sunak are of Indian descent and were born in Kenya and Tanzania, respectively. Rishi Sunak was born to these parents on May 12, 1980, in Southampton, Hampshire, South East England. His mother was a pharmacist who owned and operated a small pharmacy in the community, and his father was a medical practitioner.

The people who raised Sunak’s grandparents were originally from Punjab Province in British India, but they settled in East Africa before migrating to the United Kingdom in the 1960s. Sunak is the oldest of his two brothers and one sister. Among his siblings, Rakhi leads the Foreign, Commonwealth, and Development Office’s Humanitarian, Peacebuilding, and United Nations Funds and Programmes, while Sanjay is a therapist.

In 2014, the Conservative Party selected him to run for the seat of Richmond (Yorks), which William Hague had held in the years before that election. The Conservative Party has held this seat continuously since recorded history began. He also wrote a study on BME communities in the UK as the head of Policy Exchange’s Black and Minority Ethnic Research Unit. As a Parliament (Yorks) member, he won the general election in 2015 for Richmond (Yorks). The Select Committee on Agriculture, Food, and Rural Affairs served him for three years between 2015 and 2017.

He was in favour of the referendum on the EU in 2016. In addition, he wrote a paper for the Centre for Policy Studies in which he advocated for the development of free ports after Brexit. The following year, he penned a report advocating establishing a retail bond market for small and medium-sized enterprises.

In the general election in 2017, he won re-election to his position as a Member of Parliament from the same constituency. Between January 2018 and July 2019, he held the position of Parliamentary Under-Secretary. He voted for the current Prime Minister Boris Johnson in the election for the leadership of the Conservative Party in 2019. He even collaborated on an essay published in a major British newspaper in June 2019 to advocate for Johnson during the election campaign.

What degree does Rishi Sunak have?

He graduated in Politics and Economics from Lincoln College, Oxford and obtained an MBA from Stanford University, where he was a Fulbright scholar.

Who is the father in law of Rishi Sunak?

Indian billionaire N.R. Narayana Murthy is the father in law of Rishi Sunak.

Who is Rishi Sunak married to?

Rishi Sunak is married to Akshata Murthy. The couple has two daughters.

What is the nationality of Rishi Sunak?

The nationality of Rishi Sunak is British.

Who is Rishi Sunak?

Rishi Sunak is the Chancellor of the Exchequer since February 2020 and MP for Richmond (Yorks) in North Yorkshire since 2015. He is speculated to be the frontrunner for Prime Minister’s position.